Review: “The Singularity is Near”

Writing about the future is hard. Ray Kurzweil, a successful inventor, author, and military advisor, is much better at it than most, and he makes an interesting, nuanced prediction of where technology is taking us in “The Singularity is Near”. In essence, the Singularity is

[A] future period during which the pace of technological change will be so rapid, its impact so deep, that human life will be irreversibly transformed … The key idea underlying the impending Singularity is that the pace of change of our human-created technology is accelerating and its powers are expanding at an exponential pace.

Kurzweil cautions, “Exponential growth is deceptive … People intuitively assume that the current rate of progress will continue for future periods” whereas, to quote my old math professor, past a certain point exponential variables “jump up like a scalded ape.”

Kurzweil’s title arises from an analogy to cosmology: just as when one approaches a physical singularity, or black hole, the smoothly-but-exponentially-increasing gravitational pull doesn’t really prepare oneself for the wild things that happen when one actually reaches it, the prevailing view of the future- what Kurzweil calls the “linear view” of change- doesn’t prepare us to understand the coming technological Singularity. In other words (as Kurzweil flippantly quotes), “You know, things are going to be really different! … No, no, I mean really different!” (Mark Miller, 1986). The date Kurzweil sets for the Singularity, which he has described as “technological change so rapid and profound it represents a rupture in the fabric of human history,” is 2045. 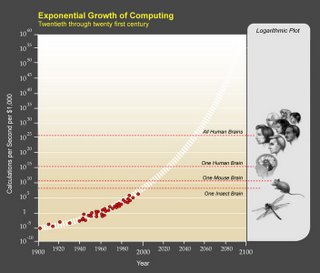 The relentless march of computing power; the quantity measured here, calculations per second per $1000, has been undergoing at least exponential growth for 60 years or more. Kurzweil claims our knowledge of the brain’s many functions and self-organizing structure is also growing exponentially, and that the convergence of powerful computing and a deep understanding of the brain means The Age of Non-biological Intelligence, i.e. computers much smarter than humans, is much closer than most people think. 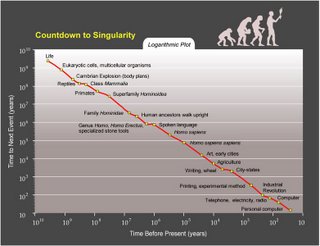 A logarithmic graph of major events or adaptions in the history of humankind. Note how each event occurs much quicker than the event before it. What happens when the line hits the bottom? The Singularity, according to Kurzweil.

So, what does Kurzweil mean when he argues that “human life will be irreversibly transformed” by 2045? He divides future life-altering technology into the following three categories:

Two key points in Kurzweil’s argument are, firstly, that the domain of exponentially-driven trends is increasing. What began with computing power has spread into other contexts such as communications and media and will soon move into biotechnology. Relatedly, once science achieves full synthetic replacements of something- when we develop full-function replacement red blood cells, full-function replacement hands, full-function synthetic intelligences- these synthetic versions are in a position to benefit very directly from advances in science and will quickly (and definitively) surpass their biological cousins.

Once again, it’s difficult to speak of the future. People can:

Given that the history of predicting the future is replete with so many mistakes, why should we listen to Kurzweil? I’d offer two reasons: the first is that Kurzweil grounds his predictions with a nuanced model of technology, his well-developed Law of Accelerating Returns, and a well-researched account of state-of-the-art advances in genetics, nanotechnology, and artificial intelligence. The second is that he has a fantastic track record in understanding innovation. He’s founded nine businesses, has been awarded the National Medal of Technology, the $500,000 Lemelson-MIT Prize for innovation, and 13 honorary doctorates, was inducted into the National Inventor’s Hall of Fame, and is one of five members of the Army Science Advisory Board. Simply put, Kurzweil’s prediction of a technological Singularity may be right or wrong, but we would be ill-served to dismiss him as a crank.

Kurzweil’s style is less eloquent than logically elegant. He draws on relevant trends from the history of our scientific and evolutionary progression, sets his context with quotations from leading scientists, and spends a great deal of time talking about some of the cutting-edge research, results, and evidence for convergence from computing, genetics, physics, biotechnology, artificial intelligence, reverse engineering of the human brain and nanotechnology, among other fields. Some of the topics he touches on, such as brain structure, are complex, but he does not introduce complexity needlessly. I find the book to be exceptionally well-grounded with many relevant citations and a fairly comprehensive section on responses to critics (see shortcomings section for caveats). With all of Kurzweil’s evidence, it’s difficult to dismiss that technology increases exponentially, and he argues that the root cause of this is economic competition. For us to stop this progression, and by implication the Singularity (barring horrific disasters), we’d essentially need to repeal capitalism.

Now some shortcomings. Kurzweil doesn’t ground his vision in the current socio-political context, nor does he speak to the issue that much of human behavior, such as the manner in which we depart from perfect rationality, deal with change, and find motivation, is informed by our evolution in certain physical and social environments. He assumes much about the egalitarian nature of technology and unequivocally identifies quality of life with technological advancement. Likewise, he trivializes the power of rapid technological change to both cause widespread ideological dispossessment and empower those thus dispossessed. He doesn’t speak to the potential of the first nation, lab, group, or individual that reaches a certain level of technological prowess to solidify their lead by doing something drastic. He doesn’t go into what may come of people or intelligences being able to directly tinker with their emotions and motivations, nor the consequences of the deep diversification and customization of human experience that biotech and nanotech will enable. He doesn’t contextualize his views in terms of other futurists such as Kevin Kelly. He glosses over any discussion of the subtleties and options involved in how information may be owned, while simultaneously predicting we will move almost completely to an information-centric society.

Some of these criticisms are blunted by the existence of www.singularity.com and www.kurzweilai.net – broad forums for papers on future trends, challenges, and situations – but most readers will not avail themselves of these websites.

In plain terms, Kurzweil understands technology. His writing tends to filter out certain subtleties of human behavior and doesn’t seem to acknowledge the causes by which and extent to which rationality and enlightened self-interest can be lacking in certain areas. But none of these criticisms have any great impact on his strongly-supported central thesis on the accelerating nature and likely path of technology.

Despite its limitations, “The Singularity is Near” is simply the best jumping-off point for considering the future that I’ve come across.

Update, 8-6-11: A lot has happened in the Singularity movement. First, it’s become more of a real movement (and many have started referring to themselves as “Transhumanists”). Second, there are a lot more people blogging about this stuff. Michael Anissimov at Accelerating Future is probably one of the more prolific people on these topics. Third, there’s greater disagreement over just this all means– specifically, what the danger spots are going forward. Many (such as Anissimov) assert that unfriendly AI may be the biggest threat humanity will ever face. Others in the movement disagree.

7 thoughts on “Review: “The Singularity is Near””