The dark and murky effects of HFCS

I like America a lot. But lately I’ve been wondering, “what’s going on here?”

The latest poll numbers are in, and I’m clearly not alone. The AP is now reporting that 81% of Americans think we’re on the wrong track. One need not look far for proximate reasons: a strange and fragile economy, huge credit card debts, the behavior of our elected officials, our election of said officials, the sad, hollow state of our public discourse, voter apathy, the general state of our media, and so forth. There are still plenty of things going right in America, but compared to our particularly exemplary history of competence, principles, and vibrant public life, something has clearly changed.

As Bob Herbert of the Times opines in today’s column, Losing Our Will,

This is the pathetic state of affairs in the U.S. as we approach the end of the first decade of the 21st century. Whatever happened to the dynamic country that flexed its muscles after World War II and gave us the G.I. Bill, the Marshall Plan, the United Nations (in a quest for peace, not war), the interstate highway system, the civil rights movement, the women’s movement, the finest higher education system the world has known, and a standard of living that was the envy of all?

This dysfunction is clearly a matter of willpower, not capacity. So what’s happening and what can we do about it?

Many (such as Herbert) simply blame President Bush. He’s certainly made a dog’s breakfast out of anything he’s touched, but I tend to see him as more of a latecoming figurehead to this national dysfunction that’s been building for quite some time.

Many would say this is a question without an answer: that when you talk about a culture getting screwed up, the dysfunction is so complex and emergent that it defies words. Similarly, a group of researchers have recently asserted that “once a society develops beyond a certain level of complexity it becomes increasingly fragile” and devotes more and more of its output to merely supporting its complexity, and as time goes on will tend to either implode or crumble in result to outside threats (they describe Rome’s downfall as such[1]). I think this is worth noting, but the ‘it just happens’ explanation rings rather hollow and unsatisfying.

Many blame the media; secular atheists; religious fundamentalists; monied interests; particular cultural quirks of the baby boomers; the winner’s curse; various academic fads and corrosive memes; various liberal movements; various conservative movements; corporations; Canadians. There’s likely some truth in some of these, but our culture has dealt with worse in the past and not become dysfunctional.

Near to my heart, we have the Change Congress movement and its description of Washington as having developed an economy of influence systematically biased toward monied interests. I think this is accurate, that it contributes to the problem I describe, and that CC has some elegant solutions.

But I would suggest there’s an embarrassingly simple yet profoundly corrosive factor underlying a non-trivial amount of America’s dysfunction: we eat too much high-fructose corn syrup.

This connection is obscure but important. To back up a bit: 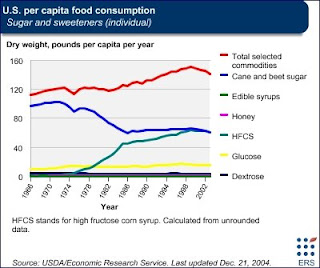 High-fructose corn syrup (HFCS) has become the sweetener of choice for processed foods and sweetened drinks. It’s cheap, sweet, and flexible (i.e., easily chemically modified for more or less sweetness and has a longer shelf-life than sugar). In the past 40 years America has had the unmatched distinction of going from eating 0 to ~70lbs of the stuff per capita annually. Lately it’s appearing this has been a big mistake: the majority of the science coming in is implicating HFCS in the drastic jumps in obesity and type II diabetes of the past 40 years[2]. A common theory (though not the only one available) suggests that because HFCS can’t be broken down in the way other sugars are, it taxes these alternate pathways, puts stress on the body’s ability to pump out insulin, and most importantly and verifiably, tends to cause insulin resistance and general problems in regulating glucose levels[3][4]. It’s likely that this looms larger for younger people with still-developing physiologies, and like many health risks, the effects of HFCS are statistical and are often felt more at the aggregate level than the personal.

This is probably old news to many readers.

We know that glucose is the fuel of thought: our brains use up the glucose in our bloodstream as it functions. But recent results from Gailliot and Baumeister[5] highlight several things about the brain’s ‘glucose economy’- among them are:

More commentary (with pretty graphs) at Cognitive Daily. It’s a neat experiment and a fascinating finding.

In essence, willpower is a finite quantity and it’s centrally (though not exclusively) linked to the presence of and ability to regulate glucose.

So on one hand, it’s established that HFCS tends to corrode our bodies’ ability to regulate our glucose levels. On the other, it’s becoming clear that the single most important factor in willpower is having a well-functioning glucose regulation system. It’s a minimal jump to put these hands together and assert that by consuming high-fructose corn syrup, we’re not just making ourselves fat and diabetic, but we’re also actively corroding our physiological basis for willpower and self-control.

I’m not saying this is the root cause of everything that’s wrong in America, but I am saying that, aggregated over 300 million people, it’d be odd if it hasn’t been a contributing factor to this weirdly lazy, short-sighted, apathetic, debt-ridden state parts of the country are in. Speaking from both a humanistic and a cost-benefit perspective, I think it makes a truly excruciating amount of sense to prioritize more direct study of this hypothesized connection, to stop subsidizing HFCS through corn subsidies and sugar import duties, and to figure out how to prevent such situations from happening in the future.

One of the criticisms of HFCS is that, because it doesn’t trip the body’s normal satiation response, people tend to eat or drink more of something if it’s sweetened with HFCS vs. a more conventional sweetener. Fructose is handled differently by the body. Fructose also has a unique metabolic footprint in that it’s broken down by the liver, not absorbed through the intestine. Both of these factors contribute to insulin resistance, and thus eventual malfunction in regulating blood glucose.

However, it’s unclear how much of HFCS’s reported contribution to insulin resistance is specific to HFCS (which is usually ~55% unbound fructose and ~45% unbound glucose) and how much of it is a result of overingestion of sugar in general (e.g., table sugar, or sucrose, is one fructose molecule bound to one glucose molecule, for a total of 50% fructose… hardly a large difference).

There are open questions in the science, however– e.g., is the extra chemical bond in sucrose relevant to health? Are some of HFCS’s observed health risks associated less with its fructose content and more with the biochemistry of how it’s commonly manufactured?[7] And what about gut flora? There’s every reason from microbiology to believe high vs. low fructose diets would lead to different gut ecologies, and that even modest differences in gut flora could have huge physiological effects, but like most phenomena involving gut flora the science is still out.

[1] Another theory on Rome’s downfall is that the common and semi-indiscriminate usage of lead for plumbing, utensils, medicine, cooking ingredients, and so on caused mild brain damage to enough youngsters that Rome could no longer support itself.

[2] Bray, George A; Samara Joy Nielsen and Barry M Popkin (April 2004). “Consumption of high-fructose corn syrup in beverages may play a role in the epidemic of obesity.” American Journal of Clinical Nutrition. 79(4):537-543.

[6] Though this particular experiment shows a link between glucose intake and willpower, the bigger picture is that it’s more precisely a link between the body’s ability to regulate the amount of glucose in the brain and willpower. Presumably too much sugar would disrupt this regulation just as much as too little. As the authors state,

This does not entail a linear relationship between glucose and self-control, such that a person who downs a large bag of candy will become a paragon of self-discipline for the next few hours.

[7] Of note, the journal Environmental Health has published an (industry-disputed) study on the prevelence of mercury in high-fructose corn syrup. The takeaway seems to be twofold: one, that a significant amount of HFCS may contain mercury due to particulars in the manufacturing process. And two, that HFCS is not ‘pure’ by any means: it takes a cocktail of reagents, enzymes, and chemicals to refine corn syrup into HFCS, and at least some of this cocktail is carried over into the final product.
Washington Post synopsis.

Update, 8/18/10: Results from forensic anthropology indicate that “people in the samurai class of Edo period Japan were poisoning their children with lead” via their lead-based makeup (specifically empaku). Hawks notes that

I think it’s interesting to find these cases where technology, adopted first by the elites, ends up biting them with unanticipated side effects. Usually they don’t even know what hit them.

Update, 4/14/11: There’s a longform piece in the NYT, “Is Sugar Toxic?“, that explores the concept that sugar isn’t just empty calories, but is actively toxic to the body. It implicates sugar in many common ills but doesn’t single out HFCS as worse than e.g., table sugar. The choice quote:

Lustig’s argument, however, is not about the consumption of empty calories — and biochemists have made the same case previously, though not so publicly. It is that sugar has unique characteristics, specifically in the way the human body metabolizes the fructose in it, that may make it singularly harmful, at least if consumed in sufficient quantities.

The phrase Lustig uses when he describes this concept is “isocaloric but not isometabolic.” This means we can eat 100 calories of glucose (from a potato or bread or other starch) or 100 calories of sugar (half glucose and half fructose), and they will be metabolized differently and have a different effect on the body. The calories are the same, but the metabolic consequences are quite different.

In animals, or at least in laboratory rats and mice, it’s clear that if the fructose hits the liver in sufficient quantity and with sufficient speed, the liver will convert much of it to fat. This apparently induces a condition known as insulin resistance, which is now considered the fundamental problem in obesity, and the underlying defect in heart disease and in the type of diabetes, type 2, that is common to obese and overweight individuals. It might also be the underlying defect in many cancers.

If what happens in laboratory rodents also happens in humans, and if we are eating enough sugar to make it happen, then we are in trouble.

Update, 8/30/11: More evidence has come out regarding the impact of gut flora on mood, emotion, and behavior(1)(2). Presumably one of the largest factors in gut flora composition is diet, particularly the types and amounts of sugars eaten. I’d categorize this “diet->gut flora->mood/behavior” link as separate from the issue of willpower, and one we can also multiply by a significant fraction of 300 million to get a stochastic change in national behavior — though one that we can’t say much about at this point.

Update, 4/19/12: Here’s a wonderful survey of Baumeister’s research on ego depletion (the process by which our finite willpower is spent).

Update, 11/12/12: An experimental wrinkle in Baumeister’s model: swishing a glucose solution around in ones mouth (and not swallowing) gives some of the willpower benefits of drinking it.

6 thoughts on “The dark and murky effects of HFCS”